Tickets will also be available at the door
$25 general, $20 arts workers/students

What is Crossing Borders?

Crossing Borders is a dynamic concert programme that creates a dialogue among contemporary compositional voices from Canada and other countries. The inaugural tour took place in January and March 2015 in Halifax, Philadelphia, and Toronto.  This year’s Crossing Borders: Realities Blurred series includes Philadelphia on March 13, Toronto on March 20, and Halifax on August 6, 2016.

On this year’s concert:

Each piece represents a reality that is blurred, a line that is crossed, a time that is both past and present.

A bit more about us, the artists in Crossing Borders:

Cheryl Duvall is a multi-faceted musician and pianist. She is active as a soloist, collaborative pianist, teacher and adjudicator and has toured and performed throughout Canada, Italy, Latvia, Estonia, Finland, Switzerland, the Netherlands, England, Argentina and the U.S. She is especially passionate about contemporary music, which has led her to co-found the Thin Edge New Music Collective, now in their fourth season. Thin Edge completed a Canadian tour in winter 2013, were guest artists in residence at the SoundSCAPE Festival of New Music in Maccagno, Italy in 2013 and at Le Pantographe in Moutier, Switzerland in 2014. To date, they are responsible for commissioning and premièring 27 new works in the past three years, with plans for 13 new works throughout their fourth concert season. Ms. Duvall is the pianist for the Toronto-based Bell’Arte Singers and the internationally renowned Oakville Children’s Choir, with whom she has toured and competed internationally with gold standings. Besides performing, she maintains a full private piano studio and adjudicates piano competitions across Canada. Cheryl completed a BMus in Piano Performance and Theory, and a Diploma of Chamber Music from Wilfrid Laurier University, as well as a Master’s of Piano Performance and Pedagogy at the University of Toronto.

***If you are unable to attend, but would still like to support the concert or donate a ticket for someone else to attend, you can do so by clicking the donate button below. Thank you for your support!*** 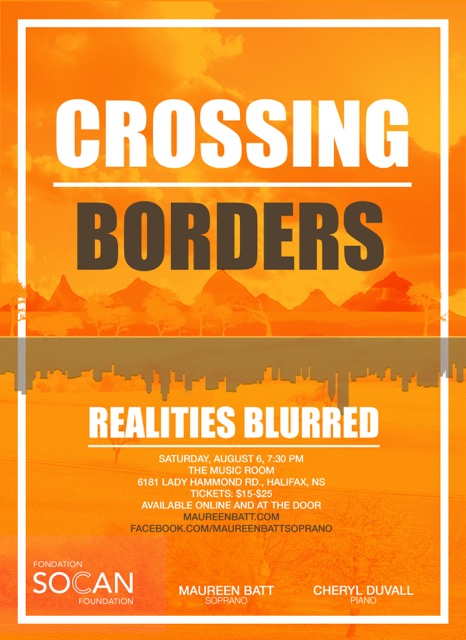